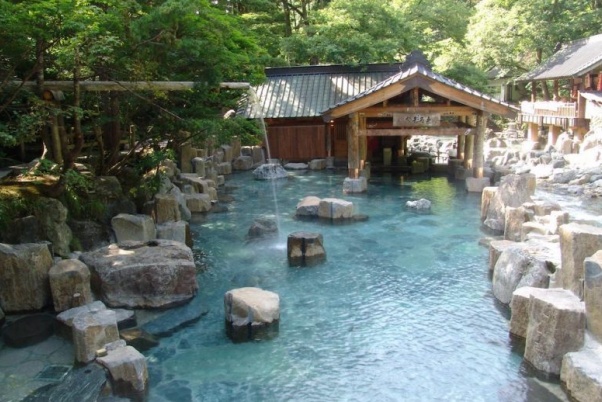 Before my first trip to Japan, I ordered the latest Lonely Planet guide to get some much needed travel inspiration. I was hesitant to be travelling to a country that didn't speak a lot of English so having an itinerary mapped out was the way to go, in true travel agent stye of course!

I remember reading through and wondering what these onsen experiences were. I looked it up and was pretty shocked to start with. No way was I going to be heading anywhere to swim with other naked people. But then closer to the trip I plucked up the courage, yes, I was going to swim naked in a Japanese Onsen.

I read through the top recommendations in the guide and came across the Takaragawa Onsen, located 20 mins from the township of Minakami, Central Honshu, Japan. I decided on this one as I read that the onsens located closeby to the city were always really busy. I worked out the train system and locked in a day that I would make it happen in my itinerary.

I first travelled to Japan in May, it was still cool in the city of Tokyo and needed to rug up, however it got increasingly colder the more I headed into the mountains.
The rail system in Japan is just amazing! But noticing soon after we were heading out into the mountains, the English interpretation was disappearing fast!

After arriving into Minakami, we took the complimentaray Takaragawa Shuttle Bus to the onsen. The bus driver didn't speak any English and I didn't know what he was saying, however, I do think it was something along the lines that the bus was for house guests only as there is a Ryokan there you can stay at aswell. He took us anyway - which was nice of him.

We arrived at the check-in area to purchase our tickets 1500 YEN - which is roughly $20 AUD per person. The Japanese man on reception spoke perfect English and was so happy to hear we were from Australia and came due to seeing the recommendations in the Lonely Planet Guide. Guessing from his reaction, we may have been one of the first travellers to the Onsen who read about it in the guide.

We were given our robes and a map of the different baths, which ones were mixed baths and which were women's only. We heading down to the Maya Bath (Ladies Only) and were the first ones there. Surrounded in snow capped mountains and with a beautiful flowing creek, it felt like something out of a fairytale.

The water and surroundings was so serene. Didn't take long to relax and enjoy the world around me. The running water in the creek nearby and the steam coming off the baths upstream made it feel even more of a dream.

I happily spent the whole day out there and were one of the last day guests to leave. I looked up the pricing to stay over night and should have just done that instead of staying for the day. Immerse myself in the experience even more! Next time....

If you would like to find out more - get in touch!