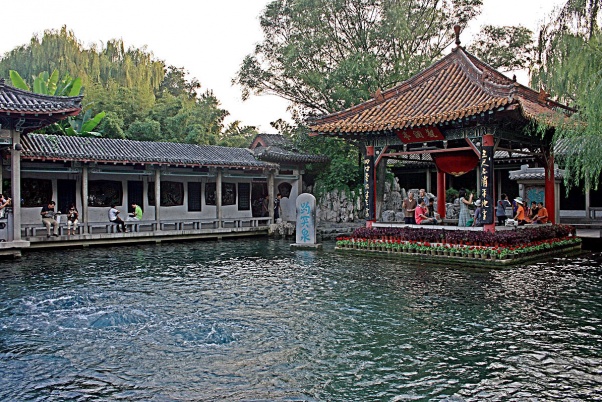 Morning high speed train to Jinan,we will arrive in Jinan at noon We will visit Song Water Pavilion Lane. in Chinese Qushuiting Street; literally: "Winding water pavilion street" is a culturally significant alley in the historical center of the City of Jinan, Shandong Province. Then we will visit Furong Street. The street was believed to be built during 1368-1644 of Ming Dynasty. Furong is actually the name of a spring which was located in the center of the street. Hence the street got the name Furong Street. The street was abuzz with hectic business activities during the two Dynasties and so many wealthy merchants settled along the street. The old glory of the street is still maintained by concentrated efforts of the administration and a new breed of commercial entrepreneurships. Today you can get delicious Chinese foods. The street is better known as "the best street on which to taste snacks in Shandong!"

After breakfast, we will visit Quancheng Square which is the centre of downtown Jinan. The spring sculpture in the centre represents the numerous springs in the city and can be called the architectural symbol of Jinan. We will then go to see Daming Lake, a natural lake fed by the flowing springs. Nearby is the Baotu Spring Park, The Baotu Spring flows from the underground caves. Its largest steam flows at a rate of 240,000 cubic meters per day. Waters gush from three spring holes together creating a sound like thunder. Last we will visit The Black Tiger Spring. It is a culturally significant artesian karst spring located in the city of Jinan. The spring is ranked as the second most significant among the 72 named springs in Jinan (after the Baotu Spring). We will head for Weifang by coach (3,5 hours). Weifang is famous for hosting International Kite Festival. Upon arrival we will visit The Kite Museum.

We will visit Folk Grand View Garden. It is one of the three Woodcut Chinese New Year Painting producing areas and Yangjiabu kites are also well-known. With a history of six hundred years, there two folk art techniques are well preserved, developing and innovating at Yangjiabu. It consists of the Museum of Woodcut Chinese New Year Painting, then we will go to the Kite Square. After lunch we will proceed to Penglai where we will see the Penglai Pavillion, a large collection of temples, lighthouses, and fortifications situated on a cliff overlooking the Bohai and Yellow sea. The pavilion has some excellent quality Chinese architecture and is an interesting blend of religion and history. Some of the key buildings include the Temple of the Dragon King, the lighthouse, Sanqing Temple (Sanqing refers to the three immortals worshiped by Taoism), and high walls and canons from the opium war. There you will also see the eight immortals statue before heading towards Yantai.

In the morning we will take a tour to Changyu wine museum. This museum consists of a hundred year old underground cellar in addition to exhibition halls that vividly highlight Changyu’s glorious history. The four-story museum is composed of a great hall, a history hall, a modern hall, a calligraphy hall and a collection hall. The hardships and glory of the Chinese wine industry are shown through accurate data, valuable pictures and historic objects. The large cellar was built in 1894 and has an area of 3,054 square meters. It is more than seven meters (23 feet) deep and was once called ‘the biggest underground cellar in Asia’. It stores about 600 oak wine barrels in 14 different standards. Among these oak wine barrels are three well-preserved large barrels from 1908 which are made of oak from France. Each of them can hold about 15 thousand litres of wine and now they are exhibits. Then we will visit the Yantai Mountain, it concentrates over 600 years’ history and is the cradle and symbol of this city. In the afternoon, we will visit Fisherman’s wharf. It is a resort combining tourism, catering, and entertainment and shopping while boasting beautiful scenery and North American-style architecture. Then we will go passed Crescent Bay.

We will visit The Little Fish Hill. Standing facing the sea, the Little Fish Hill Park adds charm to the beautiful Huiquan Bay. It is a classical garden-style construction combining the natural beauty, architectural techniques and artistic skills. Then we will visit Badaguan. It is made up of streets named after great military forts of the ancient times. It was originally a residential area for the Germans built when Qingdao was a German protectorate (1897-1914). In the afternoon, we will visit the Beer Museum. The Museum and Beer Factory (founded in 1903). We will visit the Qingdao Guest House in the afternoon. Qingdao is remarkable for its charming seashore scenery and unique western-style buildings, with the Qingdao Guest House truly deserving a prominent position among the various buildings. it is a German style castle with European regal features. Built in 1905, the luxurious Guest House once served as the residence of a German governor. This extraordinary structure, with extensive features of that period, is now rare in Germany; it is considered a valuable example of this architectural style. We will go by The May 4th Square, it is a large public square in Qingdao's central business district. The last stop of the day is Olympic sailing centre. The Qingdao International Sailing Centre was constructed for the 2008 Summer Olympics. It hosted the Olympic and Paralympic Sailing competitions. Today we will also visit two or three places for your last minute shopping. (eg Bamboo Charcoal , Chinese medicine or peal shop)

Day 7 Qingdao - Sydney (B)
Today, we will check out hotel by 10am and you can leave your luggage at the reception and enjoy the Qingdao city at leisure, you should come back to the hotel by 14:30 and you will be transferred to airport for your flight home on JD479 (1755/0740+1)