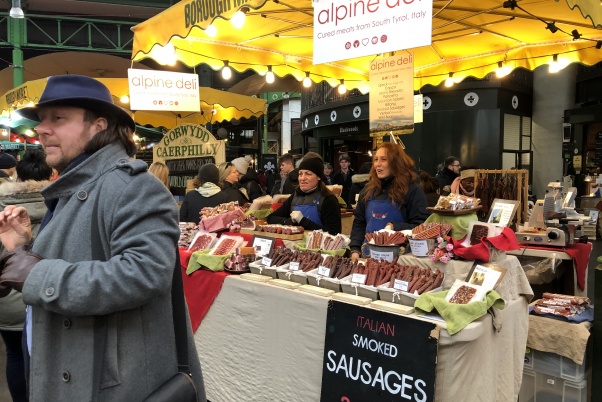 The London Story Teller – yes, another walking tour around London, but why wouldn’t you? London has so many stories to tell, and is a fabulous city to walk – so flat and easy to get around….and this walk was the source of another hidden gem I was not aware of in London and I would now say “GO HERE” to everyone I know….

But from the beginning – we started with Royal London – Green Park, St James Park, did you know that the Queen owns all the swans AND all the whales in England? Not that we saw whales today, but if you lived back in the day of voluminous dresses relying on whalebone to give the skirts structure, then knowing someone with royal connections was a bonus! London is still a place to see the unexpected – little pieces of history and tradition when you least expect. We were wandering along The Mall and happened upon a Herald, sitting on his horse, just ….. there. Waiting for the signal to head over to the Horseguards Parade to begin the ceremonial changing of the guard for the day. The Queen was at home today (it was a Tuesday – the day she regularly meets with the British PM for an update on the affairs of the State). Although it is officially her London residence, Buckingham Palace is essentially prime commercial real estate – it is the beating heart of the business end of running the Monarchy. A place of business meetings, State events, there is a huge staff on site to run the Queens affairs, not at least 2 full time horologists – yes – two people whose sole responsibility it is to maintain all of the 350+ clocks in the palace in working order and keeping perfect time.

We came from the Palace up past Downing Street, the Cabinet War Rooms of Churchill, office buildings of the government until we ended up at Westminster Abbey and the Houses of Parliament. The clock tower and Big Ben are under wraps and hopefully within the next year will be revealed again (after repairs had to be carried out on previously undiscovered war damage) and within the next year the whole British Government will have to find a new home as Westminster Palace is closed for some long overdue and massive renovations. Fire exits are all cobweb filled alleyways from the 1800’s hidden behind magic bookcases, the air conditioning system is a series of pipes of hot water that are also nearly 200 years old, leaky and ineffective, foxes find their way into the House of Commons regularly…. A well thought out modernisation is well overdue, but the key will be finding a way to make the new renovations modern and safe, yet without obliterating the centuries of history and stories that those walls encompass.

A short tube ride from Westminster (very modern tube station with sliding glass doors separating you from the train as a safety/security measure) and we arrived in Borough – home of Borough Market. I had never been here before and now I will recommend that everyone I know go there…..just incredible. It had a little feeling of an excited hustle and bustle of a true European market…..fresh fruit and vegetables, amazing breads, deli cuts of meat, seafood, AMAZING oysters (we took the advice of the fishmonger at the stand and tried the French oysters (in preference to the English and Dutch) and although they were GBP4 each, it was the most amazing oyster I have ever eaten. Took me 3 mouthfuls to get through it, it was so large. And taste? Wow!

Food literally from around the world – Japan to Tel Aviv, Bath to Turkey, Pork Pies to San Choi Bao, Fish and Chips to Pizza, and then there was the whole OTHER area of the market devoted to all things sweet and sugary….

But we must move on, and we did to London Bridge, to hear the tale of the various bridges that crossed the Thames at this point and the many reasons for their demise, we discussed the various buildings we could see on the north side of the city now, from the Walkie Talkie to Lloyds of London, the OXO Tower and the Shard, the Boomerang and many more. The London Story Teller knew it all. I think the best thing about this particular guide on this tour was the way he tried to put everything in context for us – for every place of significance from Trafalgar Square to Buckingham Palace to the Bridge and back again, he had a series of historical photos that were snapshots thru the centuries leading up to what we were seeing today. Right down to knowing who Admiral Nelson’ hat maker was, and how they were commissioned to make the hat that he wears in his statue as he stands upon his column in Trafalgar Square.

Best part is https://thelondonstoryteller.com/ can offer bespoke experiences - you tell him what you want to know about, what your interests are, what part of town excites you, and he takes you there and informs, educates and entertains!