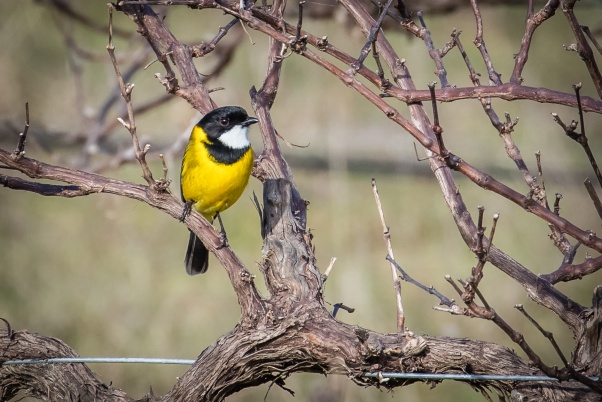 Looking for a place with abundant birdlife and a good chance of seeing it in the wild? Kangaroo Island is a prime candidate. Along any walking trail, by any lagoon or coastal flat, on any beach or headland, keep your eyes and ears open and your binoculars handy – the birds are all around.

Of the 266 bird species known from Kangaroo Island, several are secure on Kangaroo Island but no longer the mainland – Southern Emu-wren, Shy Heathwren, Beautiful Firetail and Western Whipbird.

The Glossy Black-cockatoo is still endangered on the island but appears to be recovering with the help of a management program. All year Australian Pelicans abound, Wedge-tailed Eagles soar, the Eastern Osprey nest at D’Estrees Bay is in full view, and Black Swans, and Freckled, Blue-billed and Musk ducks, are just a few of the resident waterfowl found on lagoons, sheltered bays and tidal flats. Across the island, 15 species of honeyeater – Purple-gaped, Tawny-crowned and Crescent are examples – crowd the bush with wrens, firetails, pardalotes and thornbills in conservation and national parks, and along vegetated roadsides.

The endemic Kangaroo Island species of Crimson Rosella is readily seen along roadsides and in forested areas across the island – the picnic area near Kelly Hill Caves is particularly rewarding. Black-faced, and other Cormorants gather on coastal roosts, marked by copious guano, particularly in sheltered areas.

Just as Double-banded Plovers arrive from New Zealand to settle in the tidal flats and brackish lagoon waters, Cape Barren Geese, Glossy Black-cockatoos and Little Penguins settle into nesting. Hooded Dotterels scamper to and fro across island beaches. Yellow-tailed Black-cockatoos form into feeding flocks of up to 200 to feed on Hakea and Banksia, and on introduced Pinus trees.Immature Rock Parrots occupy verges and roadside strips, and feed on coastal plants like samphire and sea rocket, until July. The handful of sightings of the Rufous Whistler in late summer–autumn could be repeated with luck and searching in the Rocky Point area of Dudley Peninsula. Please report to the Natural Resource Centre in Kingscote if seen.

The birds still abound in winter, and can be seen and heard in many sheltered locations.
Resident bushbirds, raptors, parrots, waterfowl and shorebirds go about their business in conservation parks, and lagoon and coastal inlets. Strong southerlies driven by low pressure systems in the Southern Ocean often bring albatross and other pelagic species within sight from land – Cape du Couedic is a favourite location for local birders. Endangered Glossy Black-cockatoo are often encountered in their feeding areas near Penneshaw, American River and Stokes Bay, as are Yellow-tailed Black Cockatoos. Please avoid nesting areas in sugar gum forests as human presence often disturbs nesting pairs.Cuckoos can start calling late July or early August in low open scrub and mallee, and from the occasional fencepost, and continue through to summer.

In spring the birds are loud and proud on Kangaroo Island. Most species are nesting and the air is filled with birdsong calling for mates and to establish territory. There’s plenty of food to bring the birds into breeding condition.Migratory shorebirds (e.g. Common Greenshank, Eastern Curlew, Sharp-tailed Sandpipers, Red-necked Stints, Ruddy Turnstone) begin arriving in August from northern hemisphere breeding grounds, some still with breeding colours. Tidal flats, sheltered coves, freshwater lagoons and brackish wetlands fill up with birds in a feeding frenzy. Hooded Dotterels are found across many of the sandy beaches and can be safely viewed from a distance with binoculars. They nest above the high-water mark from spring through summer, when they are very susceptible to disturbance. Activities near the nests by people, vehicles and dogs can cause nesting failure. Please keep your distance and your dog on a lead. A bi-annual census in November welcomes visitors – please contact the Natural Resource Centre in Kingscote.

Bird life remains plentiful in the bush during Kangaroo Island’s mild summers. Migratory birds continue to fuel up at rich feeding grounds for the return to northern hemisphere breeding grounds. Summer is prime nesting time for Hooded Dotterels. Please look out for these small grey, black and white birds on any beach. If you see them settling high on the beach above the tide line keep your distance.In summer, when it’s hot and unsettled, the swifts arrive on northerly air streams in flocks of hundreds, feeding on flying insects.Immature Elegant Parrots arrive in January and occupy inland bushland and farm pasture, often feeding on Cape Weed, until July.
Large numbers of Black Swans congregate in Shoal Bay, Pelican Lagoon and along the American River shore as the winter and spring habitats of freshwater wetlands begin to dry up.