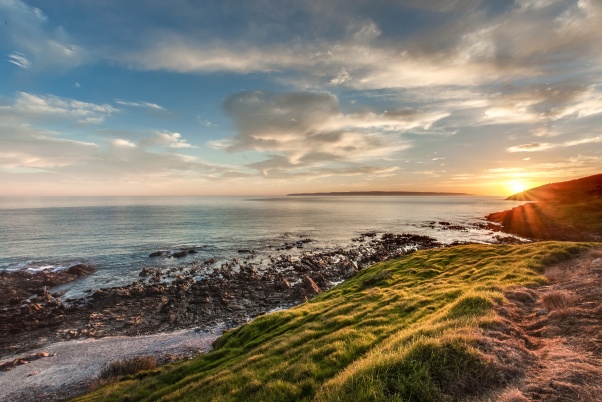 Kangaroo Island is a goldmine for the nature photographer – the glassy surface of Pelican Lagoon on a still winter’s morning; a Scarlet Robin flitting in a tree; the tiny flowers of low coastal heath in spring; a glossy yellow fungus in a damp dark forest; a narrow-leaf arbour glowing in the autumn sunset; a lichen-covered rock formation beside a pounding sea.

Year-round, the island offers a smorgasbord to the serious photographer who wants to display their Kangaroo Island experience in pixels or in print.

Before you leave home, practise focusing and switching modes while looking through the viewfinder

Give yourself enough time on Kangaroo Island to capture the images you want. It’s a big island – 4500 square kilometres – and about half of it is native vegetation. You’ll need time to get around, become familiar with places and aspects, and wait for the best light or most dramatic sky, and for the birds and animals not to notice you.

Learn something of the island’s natural history and climate and visit at the most rewarding time of year for you. Summer, for instance, is the most challenging photography season with harsh light, dust and haze during the middle of the day. As always, the transitional light of early morning and the evening is best for landscape photography. Wildlife too, is often most active around dawn and dusk. Kangaroo Island’s weather is moderate year-round by any standards, and typically much cooler in summer than nearby Adelaide. Rain falls mostly in winter but with an annual average below 700ml for most of the island, that leaves a lot of days without rain.

The autumn tones of the mallee trunks and many-shaped woody fruits are pictures waiting to be taken. The weather is also picture perfect: the wind is low; days are bright, clear and still warm. The samphire meadows glow red and set off the grey trunks of the paperbarks. The resident Freckled Ducks and Black Swans glide on calm coastal waters. Some of the larger birds take to nesting and should not be disturbed but Yellow-tailed Black-Cockatoos form into feeding flocks that are probably heard before they are seen. Hooded Dotterels scamper up and down empty beaches in pursuit of food.The mighty Rosenberg’s Goanna takes in the last rays before winter. Kangaroo and Tammar wallaby young bulge in their mothers’ pouches. Seals rest on rocks and sea lions on beaches.

Spring begins in winter on Kangaroo Island. In every patch of scrub and expanse of national park, along roadsides and tracks, colour starts to peek through. The orchid show begins – once you’ve found one, you’ll see them everywhere. In the park areas of the west, up to 450 species of fungi, many rare, make themselves visible when it’s wet – classic mushrooms, bracket fungi, ground cups, puff balls, and glow-in-the-dark fungi.Black Swans are nesting in wetlands and along rivers, cuckoos are calling and bush birds wake up early and let you know they’re there. Joeys venture from kangaroo and wallaby pouches to explore a new world.The big ticket attractions have fewer visitors at this time. It’s a rare chance to capture Remarkable Rocks people-free, and often with storm clouds and stormy seas as a backdrop. Spray can drift inland for hundreds of metres from hammering seas on the south and west coasts.

By the time September arrives the old man’s beard covers bushes and trees, creamy riceflowers dot the roadsides, and wattle yellows dominate. But behind the predominant yellow–cream show, the bush is an extravaganza of white, pink, red, blue and purple. Park the car (safely) by any roadside and take a look. Scan low down for the many small flowers on spiky bushes and myriad tiny orchids in the leaf litter. Accustom your eyes to these small gems and make your gear work for you in the low light. Rise early and listen for bird song in the bush. The migratory shorebirds return to Murray Lagoon, and other lagoons and tidal flats at Reeves Point, Western Cove and American River. White-bellied Sea-Eagles are nesting until November – give them a wide berth. The Osprey nest at Point Tinline, D’Estrees Bay is very visible from a safe distance.

*Use a telephoto lens to keep your distance from birds and wildlife.

*ake Chris Baxter’s Birds of Kangaroo Island: A photographic field guide with you.

*Talk to national parks rangers about local wildlife and landscapes

*Stay on trails to lessen your impact on Kangaroo Island ecosystems.

*Clean your boots so you don’t spread the fungus Phytophthora, a killer of many native plants.