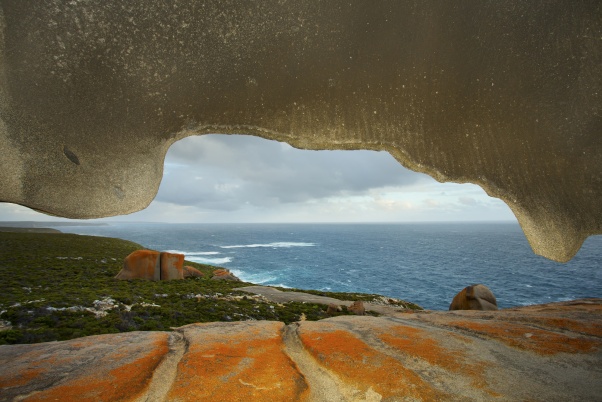 Who doesn’t feel invigorated beside the sea?

On Kangaroo Island there’s plenty of sea to be beside.

The 540 coastal kilometres take in surf-battered shores on the south and west coasts, calm coves among towering cliffs on the north coast, serene marine bays and lagoons in the north east, and sweeps of white, empty beaches and rocky shores on every coast.The surrounding waters rival the Great Barrier Reef in diversity. A rich underwater world has gorgonian corals, sponge gardens and more than 200 species of fish – Leafy Seadragons and Harlequin Fish swim with rays and over sea-stars. And there’s more blue than the sea itself – Blue Throat Wrasse, Blue Devils, Blue Groper and even the occasional Blue Whale.

Bring your snorkelling gear or grab some when you arrive (and best to pack a wetsuit, the water can be cool), check the weather for the best side of the island, and dive in.Take a leisurely swim or stroll on any beach; let the kids explore rocky beaches for all sorts of creatures; paddle a kayak in a calm bay or river estuary.Marine Parks and Marine Park Sanctuary Zones protect many creatures and their habitat. But you are still welcome to surf, swim, snorkel and scuba dive, sail and kayak. Explore rockpools and shorelines for a remarkable variety of animals. Please be sure to leave things as you find them for the next explorer to enjoy.

The many rocky coves along the KI coast and the calm weather make autumn a good snorkelling time.On the ocean, a river or a lagoon, kayaking is the ultimate cruise to see what’s happening on and around the water – quietly spot dolphins, sea eagles, pelicans, fish, swans, and explore historical settlements from the sea. Hire a kayak or book a kayak tour at various spots around the island.

Cape du Couedic is “God’s industrial washing machine. Complete with God’s industrial dryer … The wind blows straight through your head, [in] teeth achingly, eardrum shattering magnificence” (www.inkandcleaver.com, 7 August 2014).The exposed south and west Kangaroo Island coasts can be storm central, especially in winter. If storm watching is your thing, take a trip to the top of Cape Willoughby or Cape Borda lighthouse, or hold on to any vantage point in between.Calmer beaches on the north coast offer sheltered stretches to enjoy brisk afternoons strolls in gentle winter sun.Southern Right Whales are the most frequent whale visitors to KI waters, and often travel past between May and September before they return to Antarctic waters in October. Look for them close inshore right around the coast. Mothers may rest with young in more sheltered bays. Blue Whales and Humpback Whales also visit, and Killer Whales (Orcas) sometimes drop by for a seal meal.

Slip into the aquamarine dream and swim one of the many safe north coast beaches or coves. The south coast is more exposed and rugged, and most sites need a careful assessment before plunging in.Kangaroo Island’s beaches carry the remains of many sea creatures and plants – even Nautilus shells – especially after a storm. Sheltered reefs, such as Brownlow, can be an educational treasure for children and adults at low tide. Please leave living creatures within a Marine Park Sanctuary Zone. Each tide deposits a new suite of treasures, each with a story about something that has lived and is slowly being recycled by nature.No matter which way the wind blows, there’s a beach with surf, probably accessible by car – and you’re almost guaranteed to have the break to yourself. Pennington Bay works best on a small swell in a north-westerly but this is one place you might have to share – it’s the most popular surfing beach.

If sailing is your way to escape the madding crowd, then Kangaroo Island is a dream destination. The coastline changes from cove to beach to cliff. Nepean Bay has sheltered year-round cruising for day sailing and along the north coast many spectacular anchorages are hard to resist for a longer stay.Surfing beginners and boogie boarders can try Stokes Bay and Vivonne Bay. Swimming, snorkelling and kayaking suit the summer mood but summer is the one season you might have to share the water.

Recreational boats can travel through Marine Park Sanctuary Zones, but cannot fish in Sanctuary Zones. The marine parks app at www.marineparks.sa.gov.au will let you know when you are in a Sanctuary Zone and any restrictions that apply. Kangaroo Island Council maintains boat launching facilities (www.kangarooisland.sa.gov.au/boating) at American River, Bay of Shoals (Kingscote) and Christmas Cove (Penneshaw) where fees apply, and Baudin Beach and Emu Bay which have no fees.  Take a tour to discover places the experts reveal, and encounters with dolphins, coastal raptors and seals.