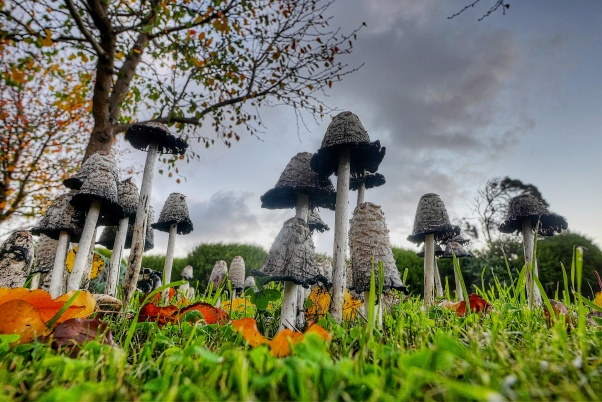 About half of Kangaroo Island’s 4500 square kilometres is native vegetation – along roadsides and creeks, and in enormous expanses, particularly in the west and south.

Get low to the ground to discover some of Kangaroo Island’s most interesting creatures – fungus.

In the cooler, wetter months the parks abound with the glorious colours and forms of hundreds of species.

Not so welcome is the Phytophthora organism, which attacks the roots and stems of susceptible plants and causes them to rot. Stay on paths and wipe your boots to protect native vegetation.

Let’s talk about the Island’s weather

Kangaroo Island's weather is moderate by any standards, much cooler in summer than nearby Adelaide but similar in winter when average temperatures sit in the mid-teens.  Rain falls mostly in winter at an average below 700ml for most of the island – that’s a lot of days without rain. The wind can be bracing but that makes for all the more adventure.

Autumn invites nature lovers to Kangaroo Island and asks them to explore. The wind is low; the days are bright, clear and still warm; and winter rain has not yet kicked in.

Late summer into autumn, the bush takes on tones that are distinctly Australian: the woody nuts of hakea, cones of banksias, pea pods and gum nuts. Some of the gum trees and mallees are flowering in cream and pink, and the flame heath begins its bright red flower display on small bushes.

Spring begins in winter on Kangaroo Island. In every patch of scrub and expanse of national park, along roadsides and tracks, colour peeks through.The scarlet-flowered running postman is in bloom and the distinctive native lilac climbs over fences and trees. Tubular correa flowers are displaying colours from green to red to salmon pink across the island.

Wattle flowers gild shrubs and trees. The fruits of the native currant, which is locally made into jam, are ready to pick on sandy soils.

In Flinders Chase National Park and Kelly Hill Conservation Park up to 450 species of fungi, many of them rare, make themselves visible when it’s wet, and for some, pretty soon after a fire. The classic mushroom shape, bracket fungi, ground cups, puff balls, glow-in-the-dark fungi, and truffles that feed our Southern Brown Bandicoot – they’re all there to see.

By the time September arrives the old man’s beard covers bushes and trees, and creamy riceflowers dot main roads and back roads. Wattles flower cream, lemon, canary and apricot – each species to its own tone. But behind the predominant yellow –cream show, and more so as the season progresses, a rich palette of the visible spectrum awaits. By late September, any trail – Platypus Waterholes Walk to Beyeria Conservation Park to Dudley Conservation Park – is a rainbow extravaganza.

The pinks alone range from dusky tinges on heath myrtles and velvet bushes to ‘shocking’ on tetrathecas. Scan the ground for the rich reward of the small, delicate, utterly gorgeous flowers too many to name. Spring is prime orchid time but orchids can be found in all months of the year. Accustom your eyes to the tiny flowers – and once you see one in the leaf litter, you’ll see dozens – pink fingers, daddy long-legs, helmet orchids, donkey orchids, greenhoods and sun orchids. The pea flowers, mostly yellow and red, come into their own in October, and the showiest of all is the cockies tongue with its large orange-red flowers.

The local hop bushes come into their own and display coppery to purple fruits that cover the small trees. The bronzed flower tassels of the she-oaks dominate the male trees. Follow the sound to flowering mallees covered in parrots and honeyeaters.

Many pea flowers, mostly yellow and red, last into summer. The endemic green correa is flowering and the velvet bushes continue their elegant show, as does the island’s only native bottlebrush.The samphire meadows along Chapman River glow red as the soil, and set set off the grey trunks of the paperbarks.

Discover more... Book a tour that has a wildflower theme.