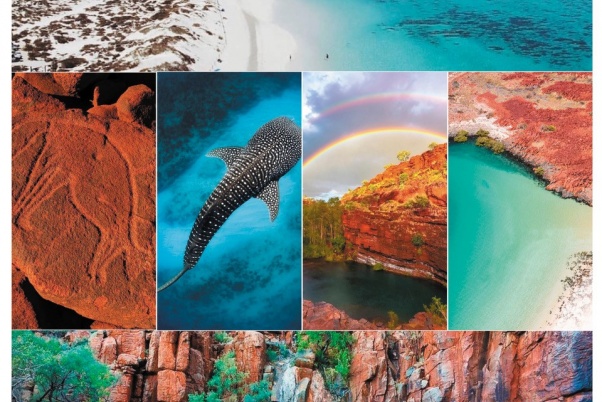 Venture into Australia’s wild and remote North-West and you will find the Pilbara. This is a place where history is etched into the solid rock, with national parks that are home to more than a million Aboriginal rock paintings, providing a visual record of a culture that has lived in this region for over 30,000 years. Towering canyons display some of the oldest rock formations found on the continent and hide tranquil swimming holes that have been two billion years in the making. Wildlife abounds in landscapes ranging from lush wetlands through to stunning archipelagos, and the oceans are home to some of the most bio-diverse marine life found in Australia. This region is at once breathtakingly old, and tantalisingly new.

Four places you must not miss when exploring Western Australia's Pilbara region:

Located on the Burrup Peninsula, the Murujuga National Park is a true historic and cultural treasure. This National Park is blessed with the highest concentration of ancient rock art in the world, with more than one million petroglyphs, some which date back to over 30000 years ago. The carvings form the lore of the local Aboriginal people, acting as a visual history that shows how they lived over thousands of years, as they adapted to changing land conditions and rising sea levels that came with the end of the ice age.

Some intriguing images show land and sea creatures that are now extinct, while others speak of traditional ceremonies and events of cultural significance. The Murujuga National Park is one of Australia's most significant heritage sites, and spending time here with an Indigenous guide is the perfect way to unlock some of the mysteries that this park holds.

If you love to see animals of all shapes and sizes happily enjoying their natural environment, then look no further than Western Australia's Dampier Archipelago. Comprised of 42 islands, 25 of which are nature reserves, this archipelago is brimming with wildlife and boasts the richest marine biodiversity in the state.

The rocky islands are home to a range of interesting creatures, from the Northern Quoll, a carnivorous marsupial the size of a small cat, through to the agile Rothschilds rock wallaby, which is able to navigate steep rocky cliffs with skill and speed. In the ocean, you can often find dolphins, dugongs, and humpback whales as well as over 650 fish species swimming amongst the colourful coral reefs and sponge gardens. This archipelago also has some of the largest turtle rookeries in the world and during summer, four different types of turtles nest on the beaches including the large and beautiful loggerhead turtle.

Covering an area of approximately 200,000 hectares, Millstream Chichester National Park is a celebration of water in all its forms. From palm fringed waterholes, to hidden rock pools and rivers teeming with fish, this nature reserve is a refreshing oasis in its desert surrounds. The rivers, rock pools and wetlands are fed by a vast underground aquifer, and the presence of permanent water has attracted an abundance of wildlife, including over 30 species of mammal, 150 species of reptiles and 110 species of birds

This is the home of the Yindjibarndi people, who are the traditional custodians of the land, and whose Elders have shared significant stories and songs relating to important locations in the park. At one body of water known as Deep Reach, the Yindjibarndi people discourage swimming as this is the home of Barrimurdi, the Warlu (sea serpent), who in a story from the dreaming, forged waterways from Coral Bay through to the Pilbara and Kimberley regions, when he emerged from the ocean and slid across the land.

With its towering sheer cliffs and cavernous gorges, Karijini National Park is a place where you cannot help but feel small, young and almost unavoidably awestruck. Here the towering rock walls and steep canyons have been forged by geological events over the space of two billion years, and you can see some of the oldest rock formations to exist on the Australian continent. The distinctive layered rock makes Karijini National Park a photographers dream - an almost surreal landscape full of ancient gorges, emerald coloured fresh-water pools, and naturally formed amphitheatres that make you feel like you have entered another world.

One of the many jewels of the National Park is the spa pool, an ice blue pond that hides in the curved cliff walls. You approach it through a thin tree lined chasm, and as you step down to the grotto, you will feel like you are descending deep into the earth.

Want to make these experiences yours? Join our Discover the Pilbara and Coral Coast small group tour with Crooked Compass