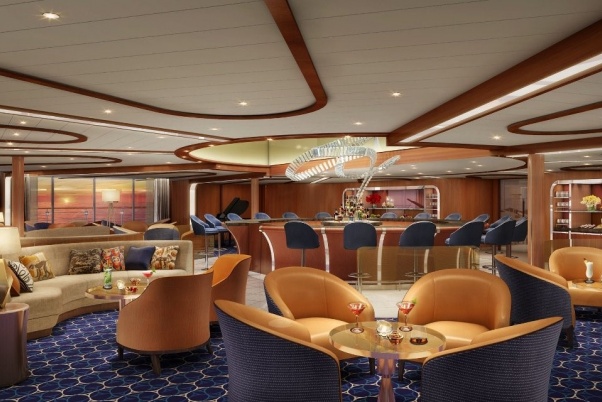 Seabourn has a new luxury ship – the Encore. Launched in January 2017, it is larger than Seabourn’s  3 Odyssey-class vessels. It can accommodate 600 passengers; has a VIP area on the top deck (The Retreat) and two new restaurants. (The Grill - an ‘evening-only’ restaurant created by US chef Thomas Keller and Sushi, the first Japanese restaurant to feature on a Seabourn ship.)

Having read all the newspapers and cruise critics’ reviews I was keen to hear back from my own clients as to how they rated it.

The reviews were mixed.

"It is a very pretty ship with an elegant feel.

The door handles on the cupboards in the suites work much better than the push system on the Odyssey class ship.

I felt there wasn’t quite as much hanging space if you were on for grand voyages or world cruises. I think this ship is built for shorter cruises.

The treadmills and gym worked well for me as there were more of them.

I liked the Observation Bar better then on the Odyssey class as I thought the space and seats were better.

The crew were amazing and worked really hard.

I liked the Sushi restaurant though I thought they should offer more than Bento Boxes for lunch. Some people would just like a light sushi meal at lunch time.

I liked the ambience in the TK Grill Restaurant and Bar (but the food didn’t always live up to expectations)."

From what I have read about the layout, it seems to work very well....

“The ship is laid out such that all the accommodations are forward and all the public areas are aft. The compact size, combined with the presence of forward and aft elevators and staircases, in addition to a dazzling spiral feature staircase looping from Deck 10 down to Deck 3, means that passenger flow is excellent.”

"The entertainment has had a makeover with new shows and the Ventures by Seabourn concept (launched in 2016) means there will be an experienced expedition team of scientists, scholars, and naturalists on board who provide passengers in-depth insights into the history, ecology and culture of the places they visit."

"The Club is poorly designed with the Bartender needing to go behind a door to make complex cocktails as they don’t have room at the serving bar. They can do simple drinks like pour wine, champagne or spirits there. It takes away from the theatre of the cocktail and sometimes you turn up and there is no bartender there because he is behind the door making a drink.

There is no laundry built though they have now put in place a room to iron clothes and are retrofitting a laundry on Deck 5. I think this is supposed to be in place by July.

The Serenity Area on Encore was basically just a corridor wedged into a small space near the Spa."

It would also seem this is an unpopular move by Seabourn…

“The Retreat is a new area at the top of the ship with 16 cabanas that can be used for a fee.”

Strange thing to do by a cruise line that maintains it is ‘all inclusive’.

Aside from that I have gone over the feedback from all my clients and there was a common thread. Staff; not enough of them; most over-worked. The reality is it doesn’t matter how amazing the food is; how beautiful the décor; what expensive products are used in the Spa, the crew are the face of the ship and if they aren’t happy it will reflect on how they interact with you and affect your overall rating of your cruise.

Anyway the news from Seabourn is apparently they are aware of the aforementioned issues and problems and are working to fix them.

(Possible) message in the story: Don’t cruise on brand new ships. During the first 1-6 segments there will always be problems and things that don’t work and need changing.

I have been over quite a few Seabourn ships and I’ve always liked them. Hopefully it won’t be long before Encore is also up to Seabourn’s usually high standards.